Roseherte (2007-08), for a ninety-piece symphony orchestra and one hundred and fifty electronic sounds, borrows its name from the Middle Dutch mythical animal that lives in the depths of the heart. Roseherte (Rose hart) is roused from her eternal sleep by the Occitan unicorn. They set out in the rain as the sun breaks through and rainbows appear in the silver-grey sky. They sing about the zeppelins and air balloons flying by. Along with humming high-tension cables they sing of clouds and time. They are fond of pairs of dominant seventh chords whose roots are separated by the consonant interval of a perfect fifth. These pairs of seventh chords occur in various transpositions throughout Roseherte, and can be conceived as combinations of two or three harmonic series with matching partials. Roseherte employs ring modulation calculations between the two dominant seventh chords occurring within a pair. In this way, the two chords are, as it were, heard in the light of each other.
All calculations were done with OpenMusic software and transformed into the orchestral score by hand and ear. The calculated frequencies underlying the instrumental score were, then, used for sound synthesis with Csound software. During the performance of Roseherte, a musician triggers the synthesized sounds with a sampler, while two stereo loudspeakers that are placed next to the orchestra on stage project the electronic sounds into the hall. The resulting flexible soundtrack amplifies the orchestral mass during the performance: It adds perspective to the orchestral sound, blends with it mysteriously as a kind of aural halo, and, then again, sets itself apart placing the orchestra, as it were, in a sound space.

further technical requirements
1.) Logic software, to be installed on the above mentioned laptop
2.) The ‘Hirstotaal’ sampler, to be obtained through Deuss Music.
This sampler with 150 electronic sounds was programmed by sound engineer and designer Jan Panis. The sounds were synthesized by Rozalie Hirs with technical assistance by Casper Schipper. The sound synthesis was done with the help of Csound software. Together the electronic sounds become a flexible soundtrack, that is used both as a reference for the orchestra with respect to the microtonal tuning as well as shaping a sound space within which the orchestral sound can evolve.
3.) Amplifier and mixer in the concert hall
4.) Stereo loudspeakers, to be placed next to or near the orchestra on the podium 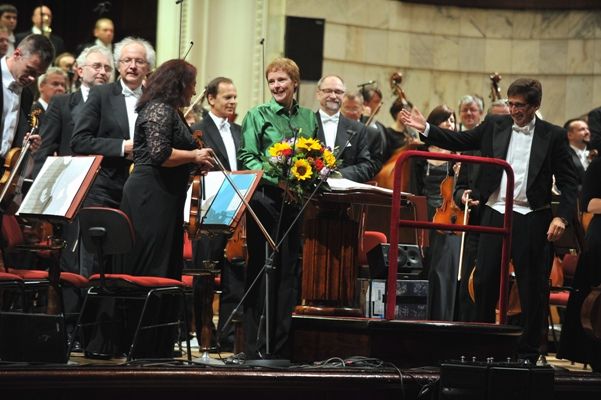 Photograph: Rozalie Hirs on stage after the performance of Roseherte by the Warsaw Philharmonic at Warsaw Autumn (photo ©2012 Jan Bogacz)